5 Best Halloween movies on Netflix: The season of Halloween is here and we cannot wait to celebrate it in our way. When some of us prefers to dress up like with costumes or go outside or spend time with families some people like to watch movies or series and there’s no better option than staying at home and do it.

There are movies that you can watch alone or with others.

I tried to add 5 movies of totally different kind that you should not get bored watching. So here are some recommended movies that you can watch on Netflix during this spooky season.
1.’It’ original movie‘:

Do this is not a new released movie but still the craze over this movie is over and over increasing. This popular movie was released in 2017 but its impact is still undeniable .

Cause it’s one of the scariest movie out there. There is a part of comedy as well as it consists children but as at the same time there are blood and horror and thrill and everything .

As you might have heard Pennywise is one of the most famous clowns of all time . And the friendship between the kids is also amazing.

I hope you will enjoy this movie. you can watch it alone but better with your buddy.

I watched this movie in last year Halloween and I really enjoyed it. It’s
one of those under rated movie that a lot of people don’t know about but I will recommend it because it very unconventional and different. At the same time the ending is quite weird so you better not expect something obvious .

The female character performed really well . Throughout the movie there are tension and thrill and suspense that you will not feel bored ever. The sound effects are good as well. 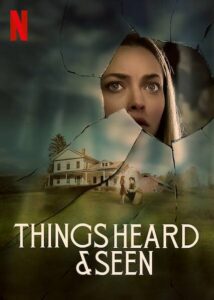 This movie was released in 2021 and it stars Amanda Seyfried. It is a Netflix original movie . It follows the story of a Young Mother as she shifts from the city to her country home with the family and starts to experience different kind of things mostly from the house of her neighbours. The name of the movie is enough to make you realize its essence.

It’s a movie that you can watch with your friends or family .

It’s 2018 release movie starring Sandra Bullock and trust me guys it’s an amazing movie. In the whole movie we will see the characters being blind fold. Why ? no I won’t tell you because for that you have to watch the movie and you will not be disappointed .

The whole movie contents a lot of thrill and fear but the ending is also interesting. So you can add this to your Halloween watch list and enjoy this with your buddies. So I am ending the list with this movie which is an animated movie named ‘Hotel Transylvania’ . It is the first movie of the franchise. It is a very much popular film and suitable for all ages. we will get a lot of comedy here it more than fear and I also like the message the movie tries to portray.

The father and daughter relationship shown here is very nice And theres a beautiful love story as well.

Overall this is movie that you can watch alone or someone and have a lot of fun.

Also Read: ‘The Winchester’ Episodes Release Date,Time, Story and Which to Watch