HomeEntertainmentAmber Heard is in Spain Leaving Hollywood Behind
EntertainmentLatest News

Amber Heard is in Spain Leaving Hollywood Behind The most talked about Hollywood diva, Amber Heard left Hollywood behind for a specific time. Reports suggest that whatever happened with Johnny Depp recently has taken enough of her. The Aquaman actress had a tough time with her ex-husband Johnny Depp in the ongoing court spat.

She lost the argument while Johnny had the Hollywood fan beside him.

What Amber Heard Is Up To

However, Amber Heard is now avoiding the situation and moved to Spain. It is uncertain whether she has left Hollywood permanently or is just taking a break. But she is not in touch with Hollywood, that is confirmed. After the case ends with Johnny Depp she is having some time alone away from the limelight. And mostly she is spending her time with her daughter and her alleged girlfriend. She was been to the Atlantic and Europe last time. And most recently she has been seen in Spain. Reports suggest that whatever has happened recently has taken a toll on her mental health. She is now trying to regain herself with the help of her closed once. And her daughter is playing an important role to get her out of this. As well as her girlfriend seems to be with her all the time in distress.

Fan’s Reaction To It

Though it is supposed to be some therapy for Amber fans are not leaving behind by criticizing her. Some think that she is escaping the whole situation and staying in Spain.

She has done some terrible job to ruin Depp’s career but couldn’t succeed. The entire Hollywood is very much aware of that and anytime soon she won’t get any better projects here. Also, it will be tough for her to face the known faces every day after what she has done. 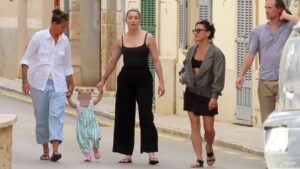 That’s why Amber Heard is leaving where she can roam freely. Some even are saying why has she not paid Johnny if she has the money to roam across the world.

However, the criticizing and trolling will go on. But this shall pass too.

Also Read: Creed 3 – Here Everything We Got to Know About