Firefly Lane 2 Is Coming Back On Netflix Firefly Lane is coming for a second season. The series is about the friendship and bond between Tully and Kate. The first season was released on February 2021 and it became one of the most successful series on Netflix.

Firefly Lane is based on Kristin Hannah’s novel of the same name. The series beautifully portrays the bond between two friends. The complication, break-ups, ups, and downs everything is a part of the series. But what made fans anxious is that it didn’t end on a good note between the two friends.

And because of that fans were expecting a second season. Expecting that everything will be well between Tully and Kate In Firefly Lane season 2.

In the first season finale it was funeral of Kate’s dad. Tully went there to meet with her. But Kate refused meet her and also told her that she will never forgive her. Where as Tully thought Kate will forgive her for whatever happened. But seemed like Kate was not ready for that. However, when the scene was playing no one had any idea about what is going on. Because in the previous episodes there was no spat going on between Tully and Kate. And everything was fine between the best friends. Audinece kept wondering what happened to them suddenly but without any discloser the season ends. 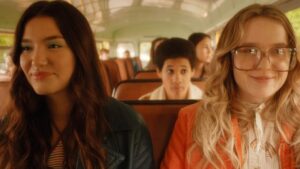