HomeEntertainmentGeena Davis: The sequel of 'Beetlejuice 2 ' Releasing Date will be...
EntertainmentLatest NewsMoviesNewsStoryWeb Series

Geena Davis: The sequel of ‘Beetlejuice 2 ‘ Releasing Date will be Announced Is an American fantasy horror comedy film telecasted on the 30th of march 1988. The film was directed by Tim Burton. The story of the film was written by Michael McDowell and Warren Skaaren. As Warner Bros distributed the film, The Geffen company produced the movie. 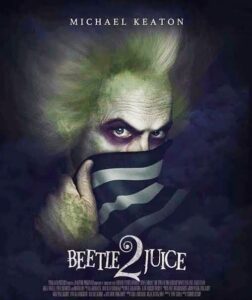 The main characters in the film were played by Alec Baldwin, Geena Davis, Jefferey Jones, Winona Ryder, and Catherine O’Hara. The airing time of this film was 92 minutes. This film won many awards in different categories like a Best horror film, Best Makeup, and Best supporting actress. After the huge hit, this film got an animated television series, a video game version, and performed at the 2018 stage musical. After a long time, In February 2022, Warner Bros and Plan B Entertainment announced that they decided to produce the sequel of this movie. Let’s find more information about this movie.

This movie is about a married couple, Barbara Maitland and Adam Maitland, who died in a tragic car accident. But they can’t go to the afterlife. They have to stay in their home for one hundred and twenty-five years. After the death, the Maitlands house was bought by the Deetz family. Lydia, the daughter of the new owner, can see the ghost couples.

They became friends. Betelgeuse is an exorcist, who came to help the Maitlands . Along with the lots of twists and turns the Maitlands and Deetz families agreed to live a peaceful life.

After thirty years finally, the sequel is going to happen. many tried to make a sequel to this movie. In 1990 the crew decides to make a sequel, but Keaton and Ryder were focused on some other projects. Gems released a statement in March 1997 that the crew had to recast the characters.

After hearing the news fans are very excited about their favorite movie and eagerly wait to watch the film.