Hollywood icon Johnny Depp’s most recent appearance sans beard. This has drawn the attention of his followers on the Internet. Depp tells supporters that “I’m good” as he transforms into an unrecognizable apparition.

So, it appears that Edward Scissorhands put his hands to good use. Johnny Depp appeared in court months ago during his defamation case against ex-wife Amber Heard. He was significantly different back then. After decades of wearing his trademark mustache and facial hair, the Pirates of the Caribbean actor has gone clean-shaven. Which has given him a completely different look. 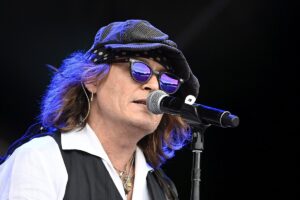 According to the report, Johnny was spotted in New York City lately. After his most recent performance, Depp was seen wearing a wide pair of blue-tinted sunglasses covering most of his face and a baker boy hat with blue stripes. Because of the dramatic change in his appearance, admirers who had gathered outside to greet the Hollywood celebrity might have thought the famous actor was someone else unlike their expectations.

The report further claims that after his most recent performance with his friend and award-winning musician, Jeff Beck. They played a show in New York City. The Fantastic Beasts actor seemed to be in a good mood. Then he interacted with fans, signed autographs, chatted, and posed for photos with them. The fans are going to Gaga for Johnny Depp’s new look and he got viral in no time. Depp took the spotlight with his charm again. The internet has been flooded with pictures of Johnny, beardless, signing autographs for fans. 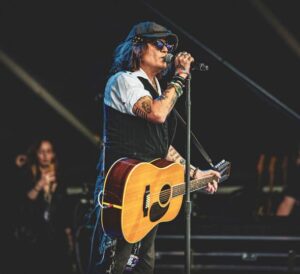 Depp was in the limelight for quite a long time for his high-level court case with Amber Heard. After that, the Hollywood star kept pursuing his passion for music. Although he was rumored to be close with his lawyer and friend Joel Rich. Johnny is apparently dating Joelle, who is still married and getting ready to file for divorce. According to a source cited by US Weekly, “It’s serious between them.” But this speculated relationship has got no official confirmation yet.

Also read: Falling For Christmas: Lindsay Lohan is Back to The Movie Business!