The cast and their role: 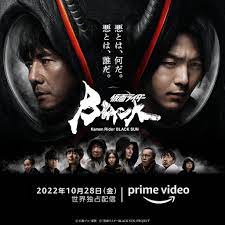 Kamen Rider Black Sun contains ten episodes. Both of the first and final episodes had the same title Black Sun. The production of the adult version of Kamen Rider had been planned since 2019. After confirming the production of the reboot version production team offered the chance to Kazuya Shiraishi the role of the captain of a ship. But he was inexperienced in the genre of Tokusatsu, he seeks advice from fellow directors who worked in this genre before such as the director of Shin Godzilla, Shinji Higuchi, and Kiyotaka Taguchi, the director of the Ultra series. Later Shiraisi rewatched the Kamen Rider Black and redeveloped the script with the help of head writer Izumi Takahashi.

In the new script, he focuses on the euphonious and tragic friendship between Kotaro and Nobuhiko and setting themselves against each other in contemporary social issues.

Plot: It has been a half-century passed since the government announced the coexistence of humans and Kaijins.

Now the year is 2022. In the period of chaos a young human rights activist Aoi Izumi appeals for the cancellation of discrimination. Later he meets a man named Kotaro Minami, who is the candidate for the next creation king and the outgrowth of the Black Sun’s existence. On the other side, another candidate for the creation of king Shadow moon was imprisoned. Both candidates for the creation king, encounter and reunion bring chaos and problems to the society.

Just like the original version of Kamen Black Rider the reboot version engages in human relationships, and brutal and downtrodden reality. Japanese history has a lot of real-life protests. Like that the series has a fight against discrimination which makes the story weight and ignorable.

In a press meeting, actor Nishijima stated that he was sure that the series, will be a human drama that contains lots of social messages because Shiraishi is the director of the series. He even adds that they will make the series can be enjoyed by adults and inspire children to live as a Kamen Rider in their hearts. The director of the series Shiraisi states that he will try his best not to break the 50 years legacy of the Kamen Black Rider series and put all his efforts into making the reboot version as original as the Kamen Rider Black.

Kamen Rider Black Sun received both praise and critics. The armor suits were shinier and polishing from the original series.

Some viewers felt that it contains more cringe and cliché scenes. This reboot version has improved lots from the original version in Gore and dismemberment’s in battles and other adult themes. But the fake motorcycle driving scenes make the viewers guess, it was taken in front of the green screen, which is laughable. Some audiences like the plot and storytelling but hate the VFX and graphics. They felt that it could be better if they had VFX in the suits of Kaijin. Except for some flaws, Kamen Rider Black Sun received good ratings and is worth watching. Also Read: “The Rings of Power season 2” Review: Everything we Know-