However, it is never wrong to add some more fun elements to make it more exciting. The creator did not miss out on that of course but seems quite impossible in the general world.

Films are not supposed to be always with logic and reality. And when it’s a rom-com audience might expect something out of the box, which can engage them to the best of laughter and emotional ride.

Meet Cute trailer launched on 8th September. It gave quite a sneak peek into the blooming love story between Sheila and Gary. The chemistry between Pete Davidson and Kaley Cuoco is apt. And they didn’t leave any stone underneath to keep the chemistry alive.

Meet Cute trailer directly takes us to a bar. Where Sheila meets Gary for the first time. But wait, there’s a twist awaiting. Sheila didn’t take much time to announce that she is from the future and they have shared such a date many a time before.

We could see Gary with a puzzled face on the very date. Sheila on the other hand tried her best to make Gary understand the whole plot of her time traveling. She wanted to fix something in Gary to make their relationship works this time.

She announced this very bluntly and told about the accident post which she fell for him. However, her friend warns her to not change anything because it’ll change the person if anyone wants to erase the pain. 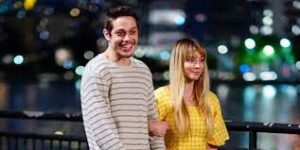 Gary also had a little take on that, while he said that it’s his pain and no one else can take it.

Meet Cute trailer is already out. And the Pete Davidson and Kaley Cuoco starrer is all set to hit the theater on the 21st of September. Director Alex Lehmann expresses his excitement for the upcoming release. He further added he wants to see the audiences reaction for this wild romantic ride.