Monica, O my darling Review: A mixed potion of thriller, suspense, and leisure– Netflix’s Monica, O my darling just dropped and the masses can’t stop giving their positive and negative reviews to the movie after a long wait so, here we are with our investigation, is the movie as bewildering or mediocre as the audience claimed?

the film, starring Rajkummar Rao, Huma Qureshi, and Radhika Apte, is an engaging suspense thriller with plenty of twists, thrills, and robots. does The 2-hour-10-minutes long dark humor crime thriller make for an entertaining watch?

A noir, crime comedy thriller that also doubles up as A cycle of murder mysteries, and a cat-mouse chase with the killer, with a classic sprinkle of romance which is a need in almost every Bollywood movie, and a revenge plot added to the proceedings, Monica, O My Darling throws in several elements to make the movie an amusing experience

Story and plot of Monica, O My Darling: 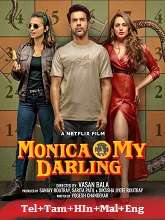 a robotics specialist, Jayant Arkhedkar (Rajkumar Rao) who struggled his way up to the top, is an ambitious man, determined to put his average and mundane life behind him, is found by the business tycoon Satyanarayan Adhikari (Vijay Kenkre) at an IIT fest. Jayant becomes an important part of the business, falls for Adhikar’s daughter Nikki (Akansha Ranjan Kapoor) and they start dating, hoping that one day they could marry and he would rule the Unicorn group owned by her father Satyanarayan Adhikari.

enters Monica (Huma Qureshi) a secretary at the same company as Jayant starts having a little fling. which starts the chaos of the movie. Monica being quite a devious character starts her charm and work but Jayant is not the only target of Monica. She blackmails Nishikant (Sikander Kher) and the company’s account team member Arvind (Bagavathi Perumal). A gruesome killing served as an aperitif, even before we’ve properly settled down. How these three plan Monica’s murder and instead land in a conspiracy themselves is what forms the crux of the film.

There is corporate jealousy, vengeance, conspiracies, and a sequence of suspenseful events which bring in the character of Radhika Apte aka ACP Naidu who takes her time to smoothly investigate the case which removes the curtain off of intrusive thoughts and secrets.

Review: Is the movie worth it?

Gritty and full of twists and turns, the movie has been directed by Vasan Bala. Teamed with writer Yogesh Chandekar, he successfully adapts the story to unfold it in Pune. The noir genre is not explored much in Bollywood but the director-writer duo has done a fabulous job of it. While Bala’s direction fluctuates in places, Yogesh Chandekar’s story manages to keep you hooked for the most part. The narrative has the perfect pace but it’s hit by way too many roadblocks on the way, resulting in a bumpy ride.

On the whole, and despite those slow spots, and a few twists which we figure out long before the characters do, Dialogues that Bala has co-written with Chandekar are quirky, peppered with the comic tone, perhaps the high point of the film that can qualify as a dark comedy. It’s not like this interesting ensemble cast isn’t working hard to keep a hold on you: Rajkummar is back in form and how. He is fabulous in the first half but shows some inconsistencies in the second half, he owns every frame he appears in. Huma puts her best foot forward and this can be among one of her best performances. Comfortable in her skin, she absorbs the character to the T. Radhika, in whatever limited screen time she gets, does effortless justice to her not-so-easy role.

I loved the way Apte brings her quirks to the scenes and makes for quite a likable cop character, Apte has such a blast with the female version of the standard quirky cop that you wish she had more to do. Sikander and Akansha are good in their parts though I was a bit surprised to see Sikander’s role, despite being pretty good in what he did, being reduced to just a cameo

‘Monica, O My Darling’ has a very Johnny Gaddar-ish feel to it as said by many audiences. No wonder it thanks Sriram Raghavan right at the outset but this mystery thriller doesn’t get even close to the over-the-top movie “andhadhun” by him.

This edge-of-the-seat thriller is playing on Netflix. ‘Monica’ ends up being a fun watch with many twists and turns but still anything very different any mystery Bollywood movie has often presented.