HomeEntertainmentNetflix on "From Scratch" Story Review: Is Based On A True Story
EntertainmentLatest NewsMoviesNewsWeb Series

Netflix on “From Scratch” Story Review: Is Based On A True Story Netflix on “From Scratch” Review: Is Based On A True Story- The American drama limited series “From Scratch” is directed by Attica Locke and Tembi Locke. From Scratch streamed on Netflix. The series contains eight episodes.  On October 21, 2022, the premiere of the series was released.The casts are Zoe Saldana, Danielle Deadwyler, Judith Scott, Kellita Smith, Lucia Sardo, Keith David, Eugenio Mastrandrea, Paride Benassi, and Roberta Rigano.

“From Scratch” The cast and their roles: 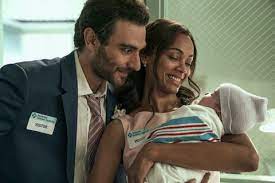 The story is about a woman named Amy, who is an American student studying in Italy.

In Italy, she meets a chef from Sicilian Lino Ortolano and fell in love with him.  During their relationship, they faced many difficulties such as different cultures, languages, and family backgrounds. It is a heartbreaking tale of two human beings who faced many challenges for their love. Whoever watches From Scratch, the storyline makes them cry and feel for the lovers. This is another hit series from Netflix.

“From Scratch” Based on a true story:

This is the real-life story of Tembi Locke and her husband Saro Gullo. After graduating from high school Tembi moved to Florence, Italy for further studies. In Italy where she meets Saro Gullo her future husband and fell in love with him. The first cute moment between Tembi and Saro was when Saro helps to find her stolen bike.

Amy’s apartment in the series is an actual apartment in Italy next to Tembi’s apartment. Lino who stands in the rain from the show is in the same place in real life where Saro stood. The Sloane bar where Amy is working is the real one which was owned by Saro and his friends.

In episode one when Amy offers to cook for Lino and added too much vinegar is a real moment between Tembi and Saro. In the series, Amy moved back to the US to stay with her sister. Like in the series Tembi returned to Texas alone leaving Saro in Italy. There he continued his job as a chef. Later in New York, they were reunited and moved to Los Angeles.

There is an adorable scene in the show in which Amy and Lino like grits or Polenta. This scene was inspired by the real-life moment between Tembi and Saro. In the interview with Eater Tembi states that she didn’t have any idea what is polenta when she first moved to Italy and she can’t connect it with grits. Later after they moved to Los Angeles she makes grits and Saro told her that this was polenta.

In New York Times Tembi told that she didn’t witness the behavior of Saro’s family, but they have to dramatize the scenes like that for the show. So she improvises the scenes involving Lino’s family based on what Saro told Tembi about his family. 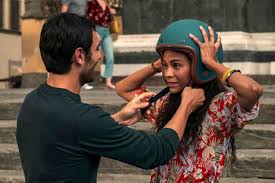 In the series, Amy and Lino go through lots of difficulties. Tembi and Saro also faced many problems. Saro’s parents didn’t approve of their love and dislike their interracial relationship.

They didn’t even attend their wedding and Saro’s parents never accepts them. Later they reconnect with them when they know about Saro’s diagnosis. Yes, like the series in 2002, Saro was diagnosed with rare cancer called leiomyosarcoma.Tembi spent taking care of Saro for ten years, he died in 2012. Just like Amy and Lino, during the period of Saro’s diagnosis Tembi and Saro adopted a daughter named Zoela. She even adds that they wanted to be parents. Like the series, Tembi goes to Sicily to bury Saro after his death and spend a summer with Saro’s family.

From Scratch are both a Heartwarming and Heartbreaking series. This will even make a stone-hearted being cry. The story builds some kind of emotional impact in the viewer’s heart. If you find this series impressive go and watch it on Netflix.

Share
Facebook
Twitter
Pinterest
WhatsApp
Previous article“Fate: The Winx Saga 3” Release on Netflix (2023): Release Date & time, Cast and Trailer
Next articleNetflix’s “Love is Blind” Season 3 Episodes 11 And 12: Release Date, Time, And All You Need To Know About The Series