HomeEntertainmentNetflix: Ryan Murphy's 'Dahmer: Monster' 2022 series is all the creeps you...
EntertainmentMoviesReviewStoryUncategorized Ryan Murphy’s ‘Dahmer: Monster’ series at Netflix- Serial killer? Umm you heard it right . The world is diverse and so are the people. There’s so many different kinds of people around the world. And none of them are same .

There are people who kills other we call them murderer. That’s very common. We probably hear that kind of news everyday in newspapers. But what if they start to kill people in a pattern ? What should we call them ? Serial killer.

The history is very famous for some notorious Serial killers at different times . Some of them are very popular still now. Their chilling story will let you sleepless at night . And you will question ‘ Are they normal or monster ?’ yes they are.So Netflix tried to put all the things together and tried to portray the life of one of the most notorious serial killers of all time- Jeffrey Dahmer . As it is a real life based story there is not a lot of scope of exaggerating. But Ryan Murphy has plotted an amazing storyline capturing each and every elements so perfectly.
Dahmer didn’t have a lot of issues in his childhood. He had siblings and normal parents. Like every normal kids he used to go to school as a kid. But things stared to take turn when he was growing up into a teen.

He had growing interests in killings insects. It was not a weird thing but his father noticed it. Soon after he joined in a blood collection centre as a staff. But it was discovered that he was stealing blood and eating them . So he was discharged. Then he started to live in an apartment alone.

Suddenly one day he tamed a boy to come with him . When his neighbor asked him he said they were a couple. Days went. And several men were also seen.
One day it an argument with a boy over his domination, he accidentally killed him. The police almost caught him up but let him go. So many people thought that he was released because he is white.

This also shows how the authority is biased and neglects serious things a lot of the times . As time went we realized there were more times when he was also released. And his brutal accomplishment went on. In the mean time he captured so many young boys, tried to establish relationship with them, then killed them and ate their flesh. Horrible.
But like everything else being it good or bad, everything must come to an end.

His neighbors who was suspecting something wrong was happening for a long time, one day smelt something unusual. It was like rotten flesh. She informed the police. And finally after years of saving he was exposed . It was discovered that he was a cannibal and a serial killer of course. 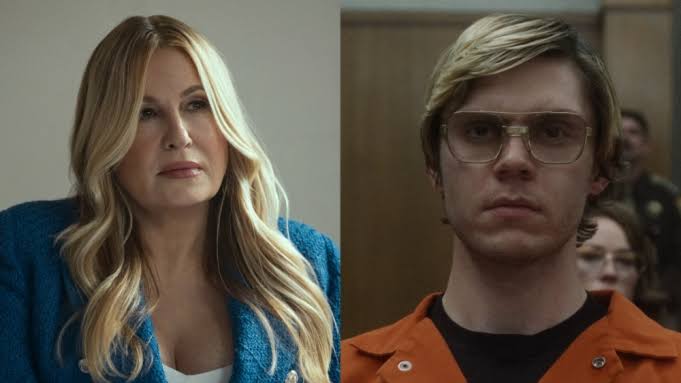 The official numbers were atleast nine but it was believed that the number could be more. In the final segment of the story he is given verdict and is punished with an imprisonment of fifteen years. Which is nothing as compared to his crimes.

First of all the acting . Evan is so phenomenal in his character that sometimes it feels like Dahmer is there. His portrayal of the character is at his best. The casting is just perfect.
Now coming to the story line which is also another amazing substance of the show. This show is not for all. Due to the elements used here and the things shown. I don’t suggest it to watch if you are weak hearted or have anxiety. It can hardly affect you.

For those who will watch it, the show will create a deep feeling of horror, disgust and phobia. It won’t let you sit in peace for a single moment. The cinematography is also extraordinary. The atmosphere created at each moment is on to the point.

The side characters also performed really well. everything about the show is just beyond complaining.

The people who watched it stated that they felt so disgusted after watching it. And that’s why it’s successful. It has become successful to create that feeling which was the motive.

The show became so popular that it became the second most watched English show of all time. A good news it will return with another season. So as a whole it’s definitely a watch worthy. If you have the courage, 100% go for it.