Panchayat Season 2 Review – Panchayat is one of the most viewed online programs in India. The comedy-drama series was developed by TVF exclusively for the streaming service of Amazon Prime Video.

The first season premiered on April 3, 2020. The show received very good reviews, with audiences praising the performances of all the actors and the technical components of the production. Panchayat received many honors during the first Filmfare OTT Awards.

Team Panchayat will be seen facing new obstacles as they go through the complexities of the village. Panchayat S2 was one of the most awaited web series of the year.

Abhishek Tripathi (Jitendra) who landed a job in a village in Heartland India with no options, finally tries to make the village his home by the end of Season 1. Season 2 begins exactly two months after he climbed onto that tank and is now almost blended into his surroundings.

Less irritated, more productive, and slowly accepting his life (often accompanied by self-doubt), Abhishek tries his best to give Phulera everything he can.

Relatability, Simplicity and Dil are the driving forces of all the shows that have come out of TVF Mill. Panchayat became the first studio to scale up in terms of creating a larger world for studios, and was able to take advantage of that by joining Amazon.

A man who feels that he is an under-achiever and the world around him has pushed himself to be a conqueror. Don’t we all do this at some point in our lives? Abhishek Tripathi came across as a representation and that is what really connected with the audience.

Over Achievement Hero narrating the stories of his glorious deeds is prime. But the one hero who has self-doubt and is pushed aside, where he is made to feel worse in his head, is you, me, and us maybe a few years ago, now or in the years to come.

So when in Season 2 you meet Abhishek partially accepting his surroundings and not really crying much about coming out of it, we all know where he is mentally.

To the credit of writer Chandan Kumar, he has not written his main protagonist in such a way that he is suddenly celebrated, as many returning titles do. He is still a Dalit man struggling to give a toilet seat to Phulera. He is still the man who complains about the lack of urban life in a small village.

So what does Chandan Kumar change? bond. These people have now understood each other, so all that is left is building a relationship. His speed with Pradhan (Yadav) and Abhishek. Abhishek and his man have a relationship with Vikas (Chandan) on Friday.

The presence of Prahlad (Faisal Malik) unwittingly binds them all. Neena Gupta’s Manju Devi who has now suddenly realized that she has power and has every right to practice it. A woman who rises above her mundane routine and demands work that suits her caliber is always a fun watch. And when this lady is Neena and the man in front is Yadav, you are in for a fun ride. 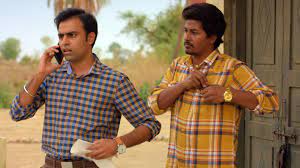 The panchayat also depends heavily on its scenario. The village is almost empty. As such there is space for equally double the population and few families. Abhishek lives in the panchayat office like his loner

Which has only barren land and a bumpy road around it. It is almost his state of mind that has turned into a scenario. So whenever you come to the Panchayat office you feel that emptiness.

Throughout the 8 episodes there’s organic humor, everyday concerns, a nod to patriarchy, a hint at the corrupt system, and on top of those feelings. The climax is made to shatter you.

Director Deepak Kumar Mishra (Permanent Roommates 2 and Humorously Yours) knows how to balance these things. The other doesn’t have authority and that’s the good part. Perhaps a contextual approach has helped as well.

The release date of Panchayat Season 2 has been set as 20 May 2022. It will be released on OTT platform Amazon Prime. Directed by Deepak Kumar Mishra, fans are excited for the second series.

Panchayat Season 2 Review will further develop the story from Season 1. The first season was aired on 3 April 2020. Since then, fans have been waiting for its second season.