HomeEntertainment'Prey For The Devil'(2022) Movie Review : This Is The Best Story...
EntertainmentLatest NewsNewsReview

‘Prey For The Devil'(2022) Movie Review : This Is The Best Story of a Horror Movie Prey For The Devil is the most recent horror film which was premiered on October 28,2022 to examine exorcism and demon possession.

However, it does so in a manner that is strikingly reminiscent of the ten previous films’ examinations of them. Because it is a 90-minute snoozefest that will leave you wondering why you bothered, Prey for the Devil ought to have been titled Prey For The Audience rather than Prey For The Devil.This movie has some potential for improvement thanks to its extremely violent and graphic content, but there isn’t much else that sets it apart. 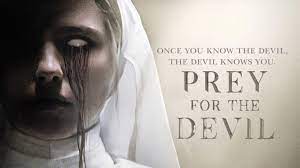 Quick Recap On Story – The story is about a Roman Catholic Church that sets up schools to teach priests how to exorcise demons in order to stop the worldwide rise in possessions by demons. Sister Ann has a special gift for connecting with demon outcasts, so Father Quinn offers to train her because nuns are not allowed to perform this ritual.

A never-ending struggle for one’s soul in the conflict between God and the Devil Stories of exorcisms and demon possession have always fascinated and terrified People. When a person is said to be possessed by an evil spirit, the nightmare scenario has been that a priest or other religious figure must find the courage to drive the spirit out of its conjugate body. However, throughout history, numerous instances of holy rites have been observed.

The accounts of these possessed individuals vary, but they all point to a sinister force that sustains Satan, the Prince of Darkness, and such a demonic presence within the individual.

“Prey For The Devil” doesn’t add anything new or interesting to the horror tropes of solitude, frustration, longing, or redemption; rather, it blends them into a patchwork of mundane mediocrity. 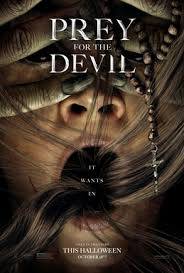 A Scene – Sister Ann makes the decision, despite all warnings, to carry out an exorcism in one location without the church’s permission. The repercussions are devastating. We are basically shown as an audience that conformity and adhering to rules are the only ways to advance any other way, things will turn out badly. They had hoped that Prey For The Devil’s message would be more encouraging, but it wasn’t In fact, this only heightens the absurdity of the entire conclusion, which makes use of the well-known saying “tell don’t show” in a desperate attempt to give our mediocre lead protagonist gravitas.

Prey for the Devil is a bad movie, to put it simply. It fails to be a terrifying ghastly, it fails to provide a decent secret, and it fails to encourage strong female characters. Instead, we encounter a few common influences that we ought to eliminate as soon as possible.

Prey for the Devil brings me right back to reality after the incredible horror film Smile. Returning to the assumption that the vast majority of horror movies will be bad. I can give a movie such a low rating in two ways. The first is that the movie is actually bad, funny, and full of things to criticize. Not one of them is the devil’s prey. The second option results in the film losing all of its value. There is nothing positive about it.

It’s difficult to care about this movie. Pertaining to anything. “I DON’T CARE” was something I told myself so many times that I lost track. I don’t mind when people get emotional. Major scares don’t bother me. A climax with stakes is fine with me.
I would rate the scare factor at two out of ten if I had to. There is no suspense or tension. I believe I did three jumps. I felt nothing as I watched these scenes that appeared to be frightening. I also think I’m done with horror films about exorcisms. There are a few each year, and most of them are pointless.