Saloum is not an ordinary African movie. Rather it comes with some unknown plots and twists which you might not have witnessed before. The film is written and directed by Congolese filmmaker Jean Luc Herbulot and produced by Pamela Diop.

The film has already been recognized worldwide and running successfully. Along with the audience’s heart, the film succeeds to grab awards because of its extraordinary plot and amazing performances.

The film starts with a female dialogue, where a woman is heard saying “Revenge is like a river”. The dialogue gives a chill immediately before digging deep into the movie.

Hold your breath because there are enormous occasions to get a chill down to your throat. The dead bodies, paranormal activities, supernatural power, horrifying incidents, and everything makes the movie a thriller masterpiece. 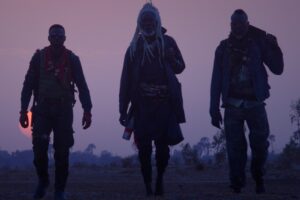 The journey starts in 2013 when 3 coups leave for hidden treasure and end up in Saloum. Which is an isolated place in Africa. There they met others while witnessing the strange activities around them.

Saloum is a fully packed movie that will keep the viewer engaged throughout. Director and writer Jean Luc Herbulot has put his best in the movie. This is something really distinct from the new age movie yet very engaging.

One movie admirer should not miss out on this masterpiece. Director didn’t compromise the cinematography, sound effect, and other technical aspects. And along with every aspect, the strong storyline makes it one whole package.

Also Read: The Cathedral Movie Review: The Boy and His Artistic Approach Towards Life