Taylor Swift is in limelight for her newly launched album Midnights. The popular singer and songwriter pour her heart out with her collection of songs. Taylor is always known for her choice of songs and as she writes her own song she never fails to give a song everything she feels about.

One song from the album, Midnights is dedicated to her boyfriend Joe Alwyn. And the fans could get it very easily. Some of the lines of the song describe how the actor fills Taylor’s life with faith and trust. She describes in the song, Lavender Haze how he was always with her when she was not even with herself. Taylor had a tough time this year when she had a visible fight with the Kardashians. She was almost distressed for a variety of reasons. And Joe Alwyn was the only one who stands by her side. The best part is he met her as a friend and stayed with her all the time as her biggest support.

He is still now the best friend in her life and finally, they are moving a step ahead. Taylor Swift accepted her relationship with her boyfriend Joe and she is hinting at a happy and lovely bond with beau Joe. 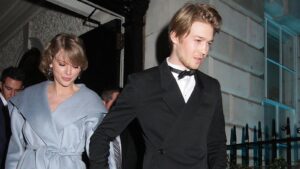 At least her song from the album Midnights, Lavender Haze hints the same. Even at the album launch event, Taylor Swift was seen holding hands with Joe Alwyn. They are having a great time together and Taylor probably found the man of her life. Who is not only standing beside her but understands the deep of her.

I’ve been under scrutiny and you handled it beautifully, a line from the song depicts the trust he showed in her dark times. There are many such references made in the song from which it is totally understood that Taylor is going gaga over Joe’s honesty and loyalty. Taylor Swift and Joe Alwyn are dating for six years now and the engagement is under consideration. They might soon get engaged, reports say.