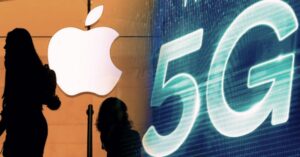 The majority of the 5G smartphone including Apple, Samsung, and OnePlus are lacking in the network’s software.
Organizations like Jio and Airtel already launched their 5G services in metropolitan cities and will soon increase the service all over the country. Airtel launched this service in eight countries and Jio launched this service in four countries. The main problem is smartphones don’t contain the software for 5G use.

In the report, they said that they are collaborating with their carrier partners in India to bring the best 5G experience to the iPhone users. Apple said that after the completion of the testing process like checking the performance of the network’s connection, quality and functionality they will release the new 5G software. Apple even added that in December iPhone users will get the new 5G software update. They told that they want to give the best experience to the users. So it will take some time to test the software.

Apple is testing this 5G software on the iPhone models

For now, they are in the testing process. In December they will release the new 5G software. Presently Apple is testing this 5G software on the iPhone models like iPhone 12, iPhone 13, iPhone 14 series, and iPhone SE(3rd generation). After the testing process will complete these iPhones will get the software
update.