‘The Witcher’ Season 3: Henry Cavill had to choose between a super – powerful metahuman who fights for justice and one that fights for coin

Now fans have opinions and conspiracies about the choice .Arguably Henry Cavill’s two most iconic roles – Superman from the DC Universe ,and Geralt of Rivia from ” The witcher ” have simultaneously found their way back into the social spotlight ,for very different reasons .
In the weeks leading up to the release of ” Black Adam ” , Dwayne ” The Rock Johnson’s anti hero passion project ,it was revealed by The Rock himself that Superman would make a guest appearance . As the role had been absent from a slew of recent DC projects ,and because Cavill remained silent about his status as a member of the DCEU ,the general population assumed that he was done with DC. Now , however it’s been confirmed by Cavill himself on instagram that he will be returning to the DC Universe for more Superman- centric content .Almost immediately after that news dropped ,it was revealed that Netflix had hired Liam Hemsworth to take over the role of Geralt of Rivia for ” The witcher ” starting with the newly confirmed fourth season . Because of the timing ,these two pieces of information feel connected ,as if Warner Bros would require all of Cavill’s time moving forward and he had to choose between the two roles .That feels logical ,but there’s another potential theory behind Cavill’s departure ,and it looks to carry some weight.

Fans took to Twitter to share their view on the situation ,as the idea of Henry Cavill leaving ” The witcher ” just to give DC his entire focus didn’t align with his previous statements on the subject. For context ,in a 2021 interview with ” The Hollywood reporter “, Cavill discussed his ongoing commitment to the series ,provided that the content remained faithful to the source material .Viewers of The Witcher think they understand Henry Cavill’s motivation for quitting the series. Fans were shocked on Saturday (20 October) when the British actor revealed he will be departing the Netflix fantasy series after the third season.

There’s info confirming that a lot of people working on The Witcher hated the source material and the games.Henry probably didn’t want to continue his contract and work with them . That information can be found in articles where it’s revealed that Beau DeMayo , a previous producer for ” The Witcher’ “, claimed the writers for the Netflix series actively despised both Andrzej Sapkowski’s books and CD projekt Red’s games.

In an interview he suggests he would love for subsequent seasons to stay loyal to the books .This could mean that Cavill would have left ” The Witcher ” with or without the safety net of more DC projects coming down the pipeline .While it has yet to be officially confirmed if writers chose to scorn the source material , more and more fans are latching onto the narrative .

One tweet said : ‘I am upset that Henry Cavill is leaving the audacity of the Netflix writers ‘.In thinking they can do better than Sapkowski’s novels ( especially after season 2 proved that they in fact cannot).
While another twitter declared : 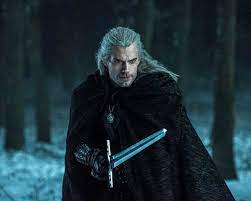 ‘This show is done ; season 2 was pretty bad so it makes sense that Henry Cavill left ..he said he wanted Netflix to be true to the source material ‘.

If social media is any indicator of the future of the series , “The Witcher ” is likely to see a significant drop in streams from the third season to the fourth .In fairness to all involved ,the future of the DC Universe is still on shaky ground too.