Hrithik Roshan-Saif Ali Khan starrer Vikram Vedha trailer is released now. And it seems to be promising. People loved the trailer and it is anticipated to be a great comeback for both actors this year.

It is a remake of a Tamil movie directed by the same writer and director Pushkar–Gayathri. The original movie was a hit and the director thus decides to make the Hindi version of it.

The plot of Vikram Vedha

Vikram Vedha is again one of the most anticipated movies this year.  And Vikram Vedha trailer portrayed the same. In this movie, Hrithik has portrayed as a gangster whereas Saif will be seen playing a tough cop.

In Dhoom 2 we watched Hrithik playing a thief and being out of the reach of the cops. It’ll be interesting to see in this movie also he made it a tough job for the cops. Though it’ll be completely different from what Hrithik had played for Dhoom 3.

The movie is a packed action thriller. And Vikram Vedha trailer is impressive enough with all the high-end action, dialogues, and everything a movie deserves. The action scenes are up to the mark where Hrithik is seen to be jumping off floors, fighting the cops, and many such scenes.

The Kal Ho Na Ho star shines bright in the trailer. Saif Ali Khan also looks promising in his cop character. He tries to maintain the pose and cool for his character. Everything that an ideal cop needs to have. 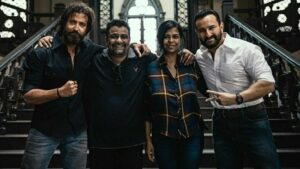 The all-young casts of the films seem to be promising. And the viewer’s expectation has raised seeing the power-packed cast of this movie. Pushkar–Gayathri’s Tamil version was magic, and the Hindi remake is expected to be presented with the same magic elements.

Post Vikram Vedha trailer release the movie is all set to fire the screen on 30th September. After the ongoing Bollywood failures and controversies, the movie is raising hope for the Bollywood Film Industry.

The star duo starrer is expected to spell magic on the screen to make it one of the most successful Bollywood releases this year.

Also Read: The Good Nurse: Everything About The Netflix Movie