HomeLatest NewsWhich is the poorest district in Bihar?
Latest News

Which is the poorest district in Bihar? Which is the poorest district in Bihar?

According to the report of NITI Aayog, Kishanganj is the poorest district of all the districts of Bihar. The number of people living below poverty line in Kishanganj is 64.75 percent. Kishanganj is located about 425 km northeast of Patna, the capital of Bihar. Kishanganj was earlier known as Krishnakunj. Kishanganj shares its border with Bangladesh, Nepal, and Bengal. 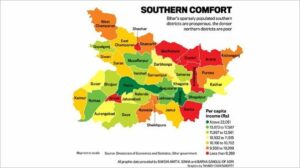 Before 1990, Kishanganj was a sub-division of Purnia district. Which on 14 January 1990, the Bihar government declared it a full-fledged district. Here you can also go for tourism, there are many places to visit like Churli Fort, Khagra Mela, and Nehru Peace Park. Apart from this, you can also go to Darjeeling, Gangtok and Kalimpong from here. Which is very near from here. The local language of Kishanganj is Surajpuri, most of the people here speak the Surajpuri dialect.